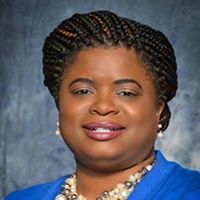 Living by the motto, “Service is what life is all about” (Marian Wright Edelman), Ms. Vicki Pearson is a dedicated servant leader both personally and professionally.

Originally from Norfolk, Virginia, Ms. Pearson moved to Atlanta, Georgia in 1988 to attend DeVry University and graduated with a Bachelor of Science Degree in Business Operations.  In 1991, Ms. Pearson became a member of Zeta Phi Beta Sorority, Incorporated through the Delta Xi undergraduate chapter and remains active with the sorority through the Kappa Iota Zeta graduate chapter (KIZ) based in Atlanta, Georgia.  Over the years, she has served KIZ in many leadership roles and chaired numerous committees, including serving as President of the chapter from 2008 - 2012. Her dedication to serving the community and her support of the Zeta sisterhood has been recognized through many awards and honors, including her induction into the KIZ Hall of Fame in 2007; receipt of the KIZ President’s Award in 2013 and 2015; and receipt of the 2017 KIZ Fervent Heart Award recognizing 20+ years of service.

Ms. Pearson currently serves Zeta Phi Beta as the State Director for Georgia. In the past, she has served on the state level as the Executive Board Chair and Parliamentarian.  Her service to the Southeastern Region includes Parliamentarian and 2016 Regional Conference Marshall and she has served on the national level as a member of the National Bylaws Committee, the National Recommendations Committee, and the 2020 Centennial Commission.

In addition to Zeta Phi Beta, Ms. Pearson is a member of the Association of Executive and Administrative Professionals; NAACP; and St. James United Methodist Church. She is also President of the KIZ Foundation, Inc., the 501c3 non-profit arm of Kappa Iota Zeta Chapter and a Director for the Sigma Zeta Foundation, Inc., a 501c3 non-profit providing scholarships and various community service support to East Point, Georgia.

Ms. Pearson is employed by IHG, where she is a Senior Executive Assistant for the Global Strategy Team. In this role, she provides administrative support to the team that oversees the strategy and planning process for the international hotel company.  She also serves as the team’s liaison to the IHG Foundation, the charitable giving program for the company.

In her spare time, Ms. Pearson enjoys reading, watching TV, going to the movies, and traveling.